Simon Kemp, founder of Kepios discussed the key numbers, trends & new metrics added to the global digital report in 2018 and the interesting world of messaging apps and its implications to Facebook, Tencent and the rest in Asia Pacific.

Simon Kemp, founder and CEO of Kepios and global consultant from We are Social, joined us in a conversation to discuss the latest global digital report in 2018. In the first part of our conversation, he discussed the key numbers, trends and new data that is added to this most important annual digital report across the world, and dissected the interesting world map of the messaging apps and its implications for Facebook, Whatsapp, Wechat, LINE, Telegram and many others across Asia Pacific.

Here is the Digital in 2018 Global Review Report:

Digital in 2018 Global Overview from We Are Social

Here’s the map of the messaging apps which we reference from the Digital in 2018 Global Report during the podcast episode: 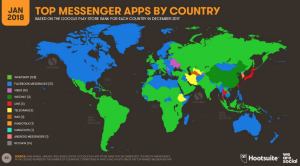 The show is hosted by Bernard Leong (@bernardleong & weibo) and are sponsored by Ideal Workspace (Twitter, Facebook and LinkedIn) with their new Altizen Desk on Indiegogo (Twitter, Facebook, Medium). Also check out Ideal Workspace’s new standing desk, Altizen and sign up for their mailing list. Sound credits for the intro music: Taro Iwashiro, “The Beginning” from Red Cliff Soundtrack.

The 3AC Demise with Kyle Davies

Qualtrics & Experience Management in the Asia Pacific with Brigid Archibald